RAINBOW TROUT ON THE

Four years after Lewis and Clark had returned east from their little journey, a fur trtalci

named Andrew Henry stumbled upon the river in what is now the state of Idaho 111.11

came to be known as Henry's Fork. Trout anglers the world over will do well to raise .1

toast to Major Henry, for he discovered what many consider to be America's greatest

"I'd always heard about this area and the Henry's Fork," said Lori-Ann Murphy.

"When I first visited, I said, 'I've got live here someday.' Eventually, I made the move.

There's always something going on in terms of hatches on the river, and there's some-

thing for everyone — riffles, flat water, social fishing, and solitude fishing. The Henry's

character is always changing. It keeps you on your toes."

eries. The common ingredients are the region's astounding natural beauty and opportu-

the Henry's headwaters, has rainbow/cutthroat hybrids that can sometimes top to

pounds and are capable of straightening large hooks; it's best fished from a float tube.

Box Canyon, a stretch of four river miles below Island Park Reservoir, is fast and furious

and not for the faint of heart, yet its runs and pockets of holding water yield some of

Henry's largest rainbows, which will often fall prey to a big ugly nymph. (First-timers will

do well to engage a guide for this section.)

fish fooled and forsaken. If there's one section of river that engages the collective fly-

fishing imagination, it probably would be the stretch that flows through Harriman State

Park, known to some as the "Railroad Ranch" or simply "the Ranch."

At first glance, the waters of the Ranch seem a bit slow and unstructured to qualify

N the ground zero of the fly fishers' Mecca. A closer look — and better yet a cast — will

llustrate the myriad currents that exist, seemingly to frustrate the drifts of anglers des- p

erately casting to feeding fish. Dense weed beds cover much of the bottom, providing a

ich food source and cover for the fish, which are mostly rainbows. There are many

maller fish here but also a good population of trout in the 20-inch range. These are

ophisticated fish that have seen a few fishermen. Sloppy presentations and wading will

ut them down fast. (Many Henry's regulars prefer to sight-fish for their quarry, limiting

he often pointless flailing that discourages fish from rising if a hatch does occur.)

Prolific insect hatches — hatches that might occur simultaneously — have earned the

'1 here's also a huge salmonfly hatch, though it generally trails off by the time the Ranch

When a hatch does come off, fish respond eagerly. You might find half a dozen or a

dvice: r) choose one feeding fish and focus your efforts on that fish, and 2) present your

ly downstream or across to the fish you choose to focus on. This last tip might seem

nathema to fly anglers schooled in the "dry-fly upstream" methodology, but there's a rea-

on. As alluded to above, your fly wortt likely be the first that these fish have seen. If ata

ll possible, you want the fish to see your offering before it sees your tippet/leader. Undert

he spring-creek like circumstances of the Ranch, this is best achieved with a down or

resents an opportunity to enjoy solitude. The sport, however, does have its social occa-

ions. One of the most notable is the opening of the Ranch section of the Henry's on

une 15. This opening date stems from an agreement between the Harriman family (who

ged harmoniously for man and wildlife, which means they didn't want hundreds of

nglers tramping through the nesting grounds of the birds who call this area home.

hen the birds leave, the anglers can come in.

Lori-Ann Murphy almost always makes it to the opening of the Ranch. "It's a huge

endezvous, and a magical time to be on the river. People who've been seeing each other

for twenty to twenty-five years show up. It may be the only time they see each other in a

given year. I've never fished the Test or Itchen in England, but I imagine it's like that.

There's tremendous camaraderie. Some seasons are more prolific with bug life than oth-

ers, but no one cares too much. There's a lot of love around this gathering, and this place.

There are a lot of familiar faces and a lot of famous fly-fishing faces, but it's not stuffy.

Newcomers are welcome, so long as they behave with some decorum — and don't walk

between an angler and the fish he's trying to raise. If you show bad etiquette out on the

LORI-ANN MURPHY moved from Seattle to the Jackson, Wyoming, region in 1988, at

least in part to be close to the fishing she loved. She soon left the health care profession

and founded Reel Women Outfitters in Victor, Idaho. Lori-Ann has many years of expe-

rience as a professional fly-fishing guide on her favorite rivers in Idaho, Wyoming, and

Montana. She worked as the fly-fishing consultant for Meryl Streep and Kevin Bacon in

the movie The River Wild. As an adviser for the Orvis Company, she can be found in the

off season giving presentations at sports shows and banquets.

■ Prime Time: The upper section of Henry's Fork (discussed here) is open from late May

to November, with the exception of Harriman State Park, which opens in the middle of

June, just in time for the famed Green Drake hatch. Fishing is good through the season;

some anglers feel that the Henry's is best in the fall — plus, there are fewer people.

10- Getting There: Last Chance, Idaho, is approximately forty miles south of West Yellow-

stone, and sixty miles north of Idaho Falls, which is served by Delta, Sky West, and

Horizon. It is a four-and-a-half-hour drive from Salt Lake City.

■ Accommodations: There are several options in the greater Last Chance, Idaho, region.

ages from $105 per night, and two-day/three-night guided packages for about $690 per

slodge.net) in Island Park offers rooms from $59 to $159. For a more upscale stay, there's

from $300 per person, based on double occupancy. There are campgrounds, too.

• Equipment: A 9-foot 5- or 6-weight rod outfitted with a floating line will handle most

all t unions on Henry's Fork, while 9- to 12-foot leaders tapered to 5x will give you enough

of the Henry's Fork predude a comprehensive list of fly patterns, but a few prominent

hatches you may encounter, depending on when you visit, include: salmonflies, Pale

lard Chance. The shop's owner, Mike Lawson, is considered by many to be the

authority on the river, and the shop can help you unravel the hatches. They also provide

woinen.com ) also guides on the Henry's. 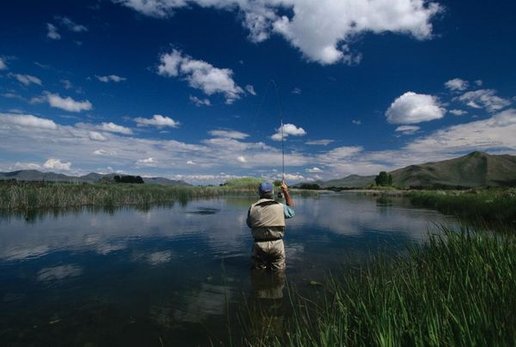